2 replies to this topic

I plan on making realistic pokemon cards for the entire johto region, so far I have the starters.

A few specific requests for these cards:

Chikorita: Not much needed here; pretty balanced and good card.
Bayleaf: Please raise the damage done on it's only attack, OR change the effect to something like "Flip 2 coins. If heads, the Defending Pokemon is now Poisoned. If tails, it is now Confused".

Meganium: A couple things bothering me with this one. Only 1 Pokemon can be affected by a status condition on the field at a time. And you need to round the damage healed up or down to half the damage (if a damage modifier was put into play, rounding up will grant you 30 damage healed if it was a 10 damage boost and if you round up),
Cyndaquil: Only problem I have with this one is that Cyndaquil's Hot Ashes should be a "+10" attack rather than a "10" attack if it is possible to do more damage.
Quilava: No problems except that this line of starters is way too overpowered as a whole. Nerf them just a little, and also bring the weakness back to x2 again (or in otherwords no mark near the weakness area) 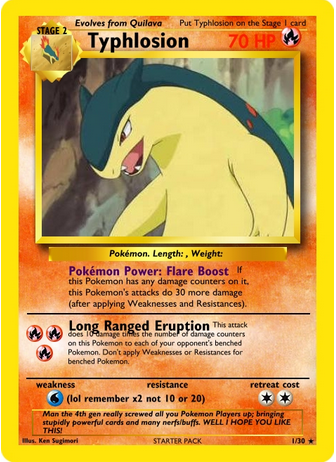 looks a little bit more revised (sorry but true :<). And just so you know the attack's damage going up doesn't affect the benched Pokemon, only the base damage, which it doesn't normally have. So when it has damage counters on it it is basically a base 30 attack.

Crocanaw: Yet again no problems

Feraligatr: :I just a nitpick but the first attack should be "[W] [W] Ice Fang" and the second one should be Gatr Rage. Gatr Rage (the previous said nitpick) I'd prefer to be "[W] [W] [W] [W] Outrage; x10 damage: This attack does 10 damage times the number of damage counters on this Pokemon.". Also, Freeze is not a real status condition in regular gameplay, but if you want it to, I'm already planning to make a "Street Rulez" version of the game as well as cards that follow these rules (such as Freezing).

Anyways over all good, but if you want a little help in the wording (not quite on with the reading), just message me :]

Thanks for the feedback, although I'm (more or less) just doing this for the fun of it.

As for Feraligatr's Ice Fang attack, I planned / imagined the Freeze condition to be very similar (or maybe even the same) as the Asleep condition.