6 replies to this topic

As the topic tags suggest, this is the evolutionary line for the Water starter of a Fakemon region I'm designing.
Note that I have most of this stuff on a custom Wikia I run, so I may link there in case the Pokemon in question learns a ton of TMs/HMs or so you get a better idea.

I'll put notes about the custom moves in the next post.

Chaotic Hurricane (BP 70) - Psychic/Special, Shukaigi's signature move; allows it to deal damage ignoring abilities and/or type matchups and attacks the lower of the opponent's defensive stats. (If used on something like Metagross or Jirachi OR a Dark type, damage is 1/2. Everything else works as normal)

Yeah, the signature move is already overpowered as is; especially combined with Shukaigi's base 120 SP ATK.

Oh and a pic of Shukaigi (like the rest of its evolutionary line, based on a rabbit except with some aspect of shounen heroes and other magical creatures) 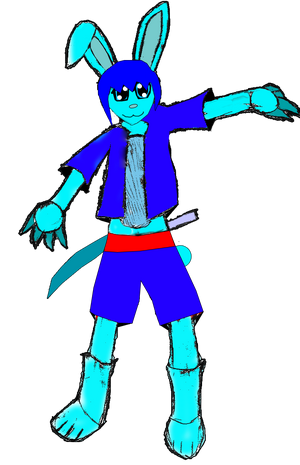 2 Over-exaggerate  with their movepools and such things

3 Create movepools that are made especially for competitiveness

8 Create a bunch of new types,evolution methods and new mechanics introduced into the game just for one Pokemon, attack or ability

I'm sorry if I offended you with this post; it just seems like your Pokemon boasted all of the above. It is just I am so used to having to criticize on peoples Pokemon and others badly criticizing mine (with a vote system of 3; if you get 3 positive votes it is in the game but if you get 3 negatives it is rejected)., so if you were to go onto that site and post it most likely it would have gotten bad criticism and rejected quickly without haste. But anyways looks like you took your time; but it looks a bit like some sort of 80's cartoon or Digimon (another reason I don't like posting a picture of my Pokemon) and is way too competitively built in its stats and movepool. Again, sorry if I seem I am acting mean, I am letting out my opinion. If you gave it WAY less of a giant movepool, competitive stats, and made up moves, then it will look way better naturally (meaning that it will look good in-game) and competitively (as everyone likes playing with a natural Sweeper not made especially to sweep). Once again. sorry for this long post; has been quite a while since I have let my criticism out.

The reason I made this line was because both Lopunny/Diggersby aren't good for battling (Azumarill is good, but ONLY if it runs Huge Power; otherwise its stats are crap aside from HP). The latter two are slow also.

In a way, I wanted to make something that has the speed (given rabbits are supposed to be fast) and has enough power to run on its own w/out needing abilities. And a slight bit at attempting a Special version.

I could subtract Shadow Ball from its lineup, since it already gets a STAB version of it (or vice versa). Think its signature move should go as well, especially since Dark types get hit from it, even though they're immune normally. It knows Moonlight b/c I took some aspect from the moon rabbit in Asian mythology.

Just like Starmie or something like that, it still can get killed by Bug, Dark, Ghost or the usual checks. Scizor can especially kill this. But yes, this was designed for OU play (though it'd get kicked into Ubers considering its moveset and power to use it)

(I expected this would get a lot of criticism, though. Hopefully the Fire/Grass starters are a bit toned down from what the Water starters have shown)

For the name origins, if you guys want:

For you all who are versed in Smogon battles, given the movesets and whatever I've given this evolutionary line; how well would they do in Gen 6 fights?

For you all who are versed in Smogon battles, given the movesets and whatever I've given this evolutionary line; how well would they do in Gen 6 fights?

It seems to me that it would be a fairly good anti-lead due to Magic Bounce and Speed Breaker. I'd say it would do fine; there are still other choices, but the viability is there.

It blocks Stealth Rock/any other entry hazards (well, redirects them anyway) so might help on teams that needs them off. (Starmie has Rapid Spin to remove said hazards, should they already be around)

Granted, Shukaigi is frailer than Starmie defensively (outside of 10 more base HP), as such Scizor and whatever checks exist for Starmie have an easier time wiping this out; not factoring in the +2 priority Speed Breaker to take out said threats prior. Signature move may help against Dark types though, since it does break their immunity and turns into a 1/2 resistance (which doesn't require Miracle Eye; given I didn't give it that move as a level up).

It does learn BoltBeam as well.

I agree that it should be fine as anti-lead (or possible sweeper), had it been released on Smogon CAP or OU. 120 base SP ATK is enough to damage a lot of `mons and its high speed allows it to hit first when it has to.

Back to Pokémon Art/Design

Also tagged with one or more of these keywords: sakura, water starter

0 user(s) are reading this topic